Racecarsdirect.com, the leading online race car sales specialist, is pleased to offer for sale by auction, a unique, Grand Prix winning Formula One car. It is fully restored and ready for the track. The car is the 1979 Williams Formula One Car #27, chassis number FW07/01, in which Alan Jones won the 1979 Dutch Grand Prix.

The auction is now open for bids http://auctions.racecarsdirect.com/#!/auctionDetails/34 and bidding will conclude at 5.00pm BST Saturday 31st march.

The FW07 was Williams Grand Prix Engineering’s first attempt at a ground effect car. This example, FW07/01, was raced eight times during 1979, in the hands of Alan Jones and Clay Regazzoni, with Jones claiming victory in the Dutch GP at Zandvoort.

After this stint in the Aurora series and various other race outings, FW07/01 was exhibited as part of the Williams Grand Prix Collection, one of the largest private collections of Formula 1 cars in the world.

FW07/01, along with its sister car FW07/02, took pride of place in a collection which spans the entire history of the Williams Formula One team.

In 2013/2014, the car underwent a complete, ground up restoration by John Cadd of JC Historics. Cadd started his race career at Williams in 1979, coincidentally at the same time that FW07/01 made its debut. He was initially part of the test team, before becoming part of the race team.

Cadd continued this role until he took over custodianship of the Williams Grand Prix Collection, which he continued to do for the next ten years.

The restoration project took over 1,000 man hours and FW07/01 was painstakingly restored as close to the original specification as possible, in some cases with original Williams parts. When original parts were not available, replacement items were manufactured to the highest racing standards, using original drawings or templates.

Both engine and gearbox have been completely rebuilt by specialists Geoff Richardson Engineering and BPA Engineering Ltd and the car now wears the livery which it ran, when Jones and FW07/01 won their first race together at Zandvoort in 1979.

Now fully restored and powered by the ubiquitous Ford-sponsored Cosworth DFV (V8) engine, the #27 FW07/01 is back on the track where it belongs, so that others can admire this truly historic car – as was the case over three decades ago.

Starting with Williams’ very first car, the Patrick Neve March 761/7, followed by the FW06 and the FW07 (this car being one of two 07s invited to take part in the event), culminating in the Massa/Stroll 2017 FW40, some 18 cars in all lined-up in The Wing paddock.

On a day where FW07/01 took to the track alongside cars such as the six-wheeled FW08B, Nigel Mansell’s 1992 Championship-winning FW14B and the FW40, FW07/01 rightly took its place as part of the unique heritage which only a team like Williams can offer. The auction is now open for bids http://auctions.racecarsdirect.com/#!/auctionDetails/34 and bidding will conclude at 5.00pm BST Saturday 31st March. 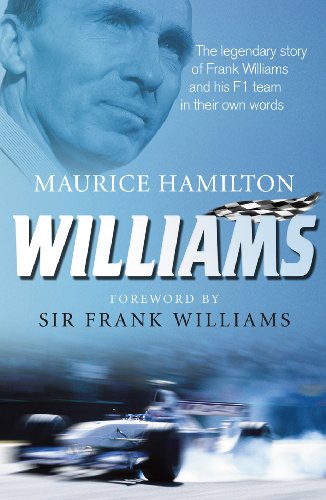 Williams: The legendary story of Frank Williams and his F1 team in their own words The Duke Grand Prix Series DVDs are made by Brunswick Films. From the people behind the best selling Grand Prix reviews of the 1970s collection, they have made this absorbing 11 part series using archive action footage, rarely seen behind the scenes film from the era, and period interviews. Focusing mainly on the 70s, this series is a mix of triumph, tragedy, personality and controversy, as well as truly thrilling archive race action.The films available are of the following Grand Prix Heroes : Clay Regazzoni, Ronnie Peterson, Jackie Stewart, Emerson Fittipaldi, Peter Revson, Niki Lauda, James Hunt, Mario Andretti, Jody Scheckter, Frank Williams and Mika Hakkinen.Commentary is by Sir Stirling Moss, one of Britain's greatest motorsport competitors and a much-loved sporting ambassador.Run time: 52 mins per film